The offer is still on the table to shoot a German Lager commercial. Bonfire Beach Party setting for May Flower Festival..

Showing parts of the grounds of the property- 2.5 hectares or 5 acres private beach

~ The Bar is stocked, hard & soft liquor, makins for Martini except I don’t have Vermouth! But I think I still have 2 bottles of Champagne.. 😉

LET’S GO DO !! I’m tired of sitting on my tush in California!!

I’m ready to party in an open air sea breeze sea spray messing with your hair..!! Torrential rains that make for flooded rivers, on full moonlit nights one’s gotta witness the whitewater shimmer of bubbles as this ferocious river drain into the sea… in solitude it’s quiet an experience to stand by it and hear the rush of water hissing..

…stand on the shore in the middle of the night, everything quiet, you see the trees twinkling with thousands of fireflies, amazing that these creatures are so small yet they can light up a tree visible on the beach.

…when you can go up to them and be in the middle of those little flapping wings… ahhh!!! ✨✨✨😢😭

Just as I was finishing this post- a “Health Alert” from the US Embassy in Manila for this epidemic, advising that some of their services to US citizens are cancelled… of course this mean to say it’s because travel is going to be difficult..

I did say I don’t know whether I’d cry or laugh… can anyone guess the answer? 💙💜💙

Not as expensive as you might think. I will sell in USDollars only.

The surrounding properties could be bargained for inexpensively from its rights holders. This Resort development possibly could rival Buracay.

Also that this property faces West- meaning it is sheltered from typhoons that visit the Pacific Ocean every monsoon.. THIS fact alone is valuable priceless asset if one knew the historical destruction of typhoons in these parts

MACOPA REEF quick video glimpse as I toured it for the first time.

One of the attractions why I bought this property are these rocks.

There are some very big granite boulders on the front, and strewn pretty much all throughout the length of shoreline of this property. There is no other property along this coast as beautifully adorned as this property!

Yes, one of the pics show a trickling of FRESH WATER suitable enough for the locals to fetch their drinking water from! Plans for a grotto on this part is still on… I never stop planning and dreaming..!😊

Mature vegetation inside the property and on shoreline. One of these trees is what this property is named after- it’s the wild variety of macopa- therefore named Macopa Reef Resort [ the name was when I wanted to develop it. Still planning on it.. did I already say I won’t stop… well, yes! ]

THIS PART OF THE SEA BED IN FRONT OF THIS PROPERTY IS A MARINE PROTECTED SANCTUARY.
Which will protect this environment from human exploitation.

If you’re a scuba diver you’ll love this feature of the property.

I dare say this reef’s #MarineEcology are better than #SharksCoveHawaii. Oh yes!

The caretaker had a story of a foreigner who followed a school of fishes to an underwater cave and almost lost his life when time came to surface for air. I refrain from commenting as to his actions and decisions, but it’s easy to that there are cave-like formations here made of coral reefs.

Points of interest worthy to explore

Since the foreshore of this resort property is now a marine sanctuary no more fishing is allowed but go out to the outside and fish to your heart’s content!

The coral bed is also about 1 mile offshore. On very low tides this coral atoll surfaces to the top and is baked in the sun for about one hour. When high tide comes in it goes under as if some mysterious power had gripped it and had taken it under water for the next show– truly #Nature is magnificently marvelous!

I was very excited acquiring this property. Plans for a park-like resort setting so gorgeous and green was immediately drafted. Alas! I have to sell it. MAYBE!! 😉

🌹💙 Endless are the possibilities to an open mind. ~~ Yours Truly. ~Min~

What’s back pack divers and dolphins have in common?

The Dolphin Room is our modest priced accommodation available. If you’re on a “back pack diver” budget but want all the comforts of a Western- style hotel room, this one’s for you.

Large closet for all your diver luggages.

For a single person you will not want for material comforts in this room. It has all the amenities you need

Who says ‘thrift’ and ‘bargain’ is synonymous with ‘poor?’ Definitely you are not. Feel like a King and sleep well. Wake up around 5:00 am, open your drapery and look out the ocean.

Do you see “it?” Yeah- there are dolphin pods that come along this bay and get THIS up- close!

The Dolphin Room. You are richly deserving of all those extra pamperings we offer at the Resort, and your plushy accommodation at The Dolphin Room is not a King’s ransom but a bonus.

Hey, what else could you want? A rental boat maybe to chase that dolphin pod? 😁

The Coach Room– is your best bargain in this whole island!

Two beds mean cost can be split with a friend

Economy budget with a not-so-economy comfort!! The full Guest House can be rented wholly for big company, on any term like weekly or monthly or yearly.. ask for details.

So named because at the time I was putting away the keys I had it threaded on a Coach purse keychain. That pink leatherette label is easy mark even in the dark.
So there you have it. No great secret! 😊

But also that it is the kind of quality that the name evoked. One reason why I stayed with the name “Coach”. It denotes quality craftsmanship, high quality materials, REASONABLY PRICED! For the money you pay. I’m talking about the room! 😉

When I go on vacation, ‘shopping’ is my favourite activity and the ‘purses’ department is where I pay homage to first. Of course.

And Coach is almost always what I take home.

‘Almost always’ because I also have a ‘love’ for utilitarian-designed Italian leather purses.

So now you know my mindset. Hey, Woman is who makes Executive decisions around here, and it counts what’s important!

Signature Luxe Suite of a 3-bedroom Guest House is Min Palms Resort entry into the Luxury Western- style accommodation here in the island.

As the builder I am pretty proud of the fact that this is the first of its kind luxury accommodation in all of Mindoro Island or even Palawan Island. This even with Conde Nast designating Palawan Island as Most Beautiful Island Destination 2015 (year?)

A German tourist quipped,  “yes, please build more of this. My friends and I want luxury accommodation like this after a day’s busy activities but there is nothing in this island.”

The “show and tell” for the Vice Governor of Occidental Mindoro and his party was big success.

The Palms Luxe Suite is ample room for the Executive who needs accommodation for an extended stay. Make the Resort your home base away from HQ

When the guest wants to cook the dinner, you let him!!

Sputzli, the way he wrote it, is a Swizz- German food that’s the equivalent of fresh pasta preparation in Italian.

The Chef guest made 3 different types of sauces:

. Italiano which is the classic red sauce made with tomato paste.

Very interesting the way the dough was prepared; let stand at room temperature for 5 hours. It was kneaded thin on a cutting board and sliced with a knife from the board, dropping into boiling water.

The water needed to be changed when it got thick from receiving the dough. Cooked dough was let cool off before serving, scooping sauce on top.

It was fantastic! Never had such, let alone prepared by a guest! MORE PLEASE!

The Champaign was chilled for 1 hour in the freezer then 6 hours in the fridge. Perfect pop!

The whole dinner was consumed on the porch, complete with unexpected power blackout before the rains which enhanced the romantic ambiance of the whole dinner with solar lamps. [ I guess! ]

Just really depends on one’s mindset then these Nature outbursts can be an enhancement to an already rich experience!

Count on the unexpected and never have expectations!! Lol..

Dance with Mother Nature’s whims. I swear it adds an unforgettable element to your moment‼️❤️

Nature is such good thing! It is a pleasure. It is a relaxing natural entertainer.

It’s been said that sea turtles visit the VERY beach where they were first lain as eggs by the mother.

Humans don’t get in its way and let these gentle animals propagate.

For some reason these creatures have the natural GPS encoded in their genetics. They are able to hone in on that particular body of water and make that journey to lay their eggs there.

Unfortunately these gentle creatures that have no defenses except their hard shells have to share space with humans and development that sometimes are not sensitive to Nature and the other species that deserve their own share of space.

PS- the man holding the turtle was my construction employee. Was he not working for me at the time I knew for a fact that this little cute turtle would have ended up as soup in his skillet!!

Sometimes I cannot blame the humans either. If their family were going hungry– what to do??

The natural processes at play here is much in the same way as another species, the Salmon. When Salmon gets to maturity to spawn they go back to that source of water where they themselves were hatched. Sadly for the adult fishes, they die after assuring the continuous survival of their species.

This particular visitor came around April 20. If this visitor laid eggs on the beach no one had known where it is. Good. I know people eat the eggs, and the turtle meat! Ugh. Not when I’m around.

Due to its size we believe it might be in the same batch of hatchlings as the one caught and tagged a year ago. I hope s/he comes back when  I’m there so we can tag it too. It would be nice to find out how many times an individual turtle shows up at the beach.

If this one is a female and had laid eggs the nest won’t be very far from  our doorsteps. 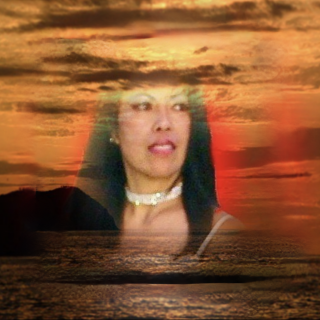 Fashions Biz/ Owner Builder The MC Resorts PH An exhilarating dive into the unknown! As long as I ride this exotic adventure into the Sunbelt's torrid Equator I live neither 'here' nor 'there'. Sometimes it's tiring, all times it's worth it. Fashion Design & Architecture are same, sewing & building are same why I love both. Fertile imagination is all the tool one needs